Every culture has its own taste in comedy.

This may have come from an American movie, but Americans have never cared much for it. Instead, the French find Jerry Lewis HILARIOUS. A comedic genius! Americans are baffled. As they are at Japanese game shows:

Lest you think I imagine Americans are above it all, let’s be quite clear that we gobble up our own brand of foolishness just fine: 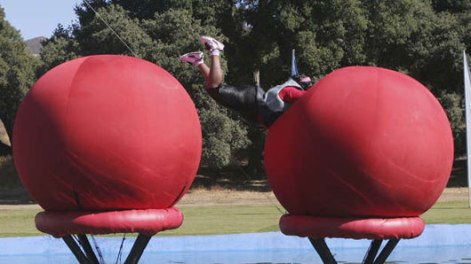 Yes, that’s a captured image from Wipeout, in which Americans line up for the chance to be humiliated on television–bounced off of giant balls, punched in the face by automated boxing gloves, launched into the air by a trampoline lily pad.

Whatever the features of a particular nation’s brand of comedy, what they all have in common is a wide streak of irreverence and self-deprecation. Americans, I can report, are ridiculously eager to laugh at each other. The whole genre of American reality TV, in fact, is based on the fact that we LOVE to watch each other, to gawk, to speculate, and above all, to laugh. (Holla Team Bachelorette!) We also love to show off, so there’s no shortage of people clamoring to be the ones in front of the camera.

That is NOT the case in Saudi Arabia. I wish I knew better what Arabs think when they turn on Wipeout or Let’s Make a Deal or Duck Dynasty–anything out of the vat of American shamelessness-based entertainment. And yes, plenty of that slop is here. Keeping Up with the Kardashians and Toddlers and Tiaras and yes, Duck Dynasty. Subtitled, doggone it, so we have no secrets. Arabs have as much opportunity to laugh at us as we do to laugh at ourselves. And I’m fine with that. I just wish it didn’t give them the idea we all live like that.

But a willingness to accept laughter is not universal. From what I can see, the Saudi national skin is very, very thin. 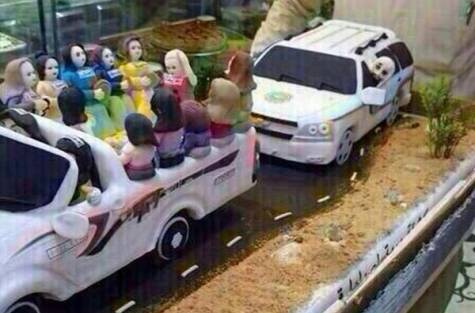 That’s a picture of a cake that got the decorator fired this past week. As well as the guy who took the picture and posted it on Facebook. The full article is here, but the gist of it is that an employee made the cake in response to a customer request, somebody thought it was great and posted a picture, and the public (that’s right, the public, not the religious police themselves) came out with torches and pitchforks. Commenters on social media said the cake “was making fun of the highly respected members of the Commission for the Promotion of Virtue and the Prevention of Vice who were depicted as using a van to chase the all-women truck.” Well, of course it is. So? Poking fun at bumbling police is classic comedy–Keystone Cops, Barney Fife, Officer Wiggins, Brooklyn Nine-Nine. Why are religious police, who scribble women’s faces off product packaging, regarded with a dementor-like level of fear, while traffic police, who deal in actual matters of life and death, are treated with comic disregard? There was certainly no mistaking the bakery owner’s groveling to apologize and assure all offended parties that they are, in fact, most honorable. Clearly I’m laughing at the wrong thing.

Not so here. I doubt very seriously that there’s an improv troupe somewhere in Riyadh dressing up as the King and his brothers selling off royal surplus on QVC.

Back in college I had three Saudi classmates in a lecture-hall class on the history of religion. They clustered at the back and never participated. From where I sit now, I’m pretty confident they didn’t see the point of studying anything about other religions and were just there to fill a GenEd requirement. But as the teacher was talking about the role of the “turn the other cheek” Christian doctrine in Western societies, agitated whispering started at the back of the class and then one of them abruptly spoke up. “Excuse me,” he said. “Are you telling me that if somebody insults my father I’m supposed to do nothing?” Yes, the teacher said. That’s how it works. More whispering. Then, “Nothing? About an insult to my father?” That’s right. They threw their hands up, pushed back in their seats, and folded their arms. I give up, the body language said. You people are without reason.

The seriousness with which racial, religious, national, tribal, and family honor is taken in Saudi Arabia is far beyond my Western comprehension. I come from a society where being embarrassed about your parents is a rite of passage into adulthood. Where Catholics and Jews tell each other jokes about Catholic school or Jewish mothers, where people do comedy about Jesus answering prayers for a football victory. Coming from that context, it’s really hard to understand how people can get so angry at jokes or critical comments. In May, Saudi Arabia considered sanctions against Holland in the wake of a far-right politician printing bumper stickers that they felt insulted Islam. In April, the Saudis criticized Norway‘s human rights record, calling “for all criticism of religion and of prophet Mohammed to be made illegal in Norway.”

In other words, Saudis are saying that Muslims have a human right to not be offended. A right to free speech? What? How could that be real? (Unless, of course, it involves the right to call everybody else an infidel.)

This past week, families bringing girls to a number of schools around the Kingdom found this sign plastered at the front doors: 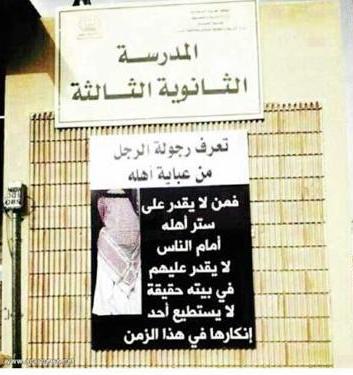 Yeah, I can’t read it either, but according to this article, the signs “urge girls to dress modestly, [and] carry slogans that say a man’s manhood can be recognized by the abaya of his family members, and those who cannot cover up their families in public will not be able deal with them at home.”

When I hear “Honor thy father and mother” I think “Be a decent human being they can brag about and call your mother.” Keeping myself covered so as not to emasculate my father is a new one. Like I said, “honor” here means something vastly different and more serious than I’m used to.

I know Arabs don’t want me to find anything that happens here funny. I have a problem, but I know it’s a pretty common American one, or else somebody else would not have made this, and I wouldn’t see it popping up over and over on Pinterest, usually captioned “Too true!” 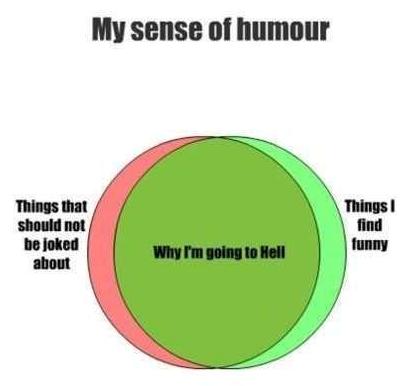 Perhaps there’s something to be learned in the cross-cultural humor gap. Perhaps the Western willingness to laugh at serious things, to believe that the laughter does no harm to the subject, and, in turn, to be laughed at yourself reveals not just a personal desire to be on stage, but a certain comfort level with the give and take of the global stage. And that’s a necessary attribute in an age when nothing interesting or entertaining stays private for very long.

In Saudi Arabia, however, the intent is to not be seen or discussed or judged at all. Bedouins had the desert to themselves until oil dragged them into international commerce. They’ve taken on the trappings of the modern world, but retained the tastes and habits of desert isolation. Walls keep passersby from seeing into Saudi homes, and travel restrictions keep passersby from seeing into the country. Women dress in black so that they can be overlooked, and men dress in white thobes and red-checked headscarves with the express purpose of not distinguishing themselves. (Though the Valentino label may say otherwise.) Humility and obedience are cherished values. Academic and religious study focuses on memorization. Inappropriate or even illegal behavior is usually ignored as long as it stays out of sight, behind walls, where no one can talk or laugh about it, thereby shaming the family.

Among individuals, the person who has the easiest time making friends is the one who’s open and has a good sense of humor, who doesn’t take himself too seriously and can laugh at his own oddities. I’m starting to think the same thing plays out between nations. Think of any difficult-to-deal-with entities these days: North Korea, Russia, Afghanistan, Iran, and, some may argue, Saudi Arabia. All high on self-importance, low on humor. Personalities that are just as hard to love on the global stage as they are on the school playground. On the playground, the kid who gets mad when somebody makes fun of his hair is going to end up as the weird kid with no friends. And if that’s how you want it, fine. But if you want to build relationships with people who will stand with you when things are tough, you have to learn to not take yourself too seriously, to allow your dad’s honor be his own problem, and to let a funny cake be, well, funny.

4 thoughts on “Funny to You, Maybe”