In the U.S., the stock phrase trotted out anytime you need to remind people that deep down, kings and criminals and dishwashers and billionaires are really all just the same, is “We all put our pants on one leg at a time.” 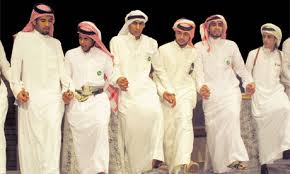 Kinda hard to sell the idea that it’s a small, small world when you’ve got a country out there where folks don’t even put their pants on one leg at a time.

But when you think about it, it’s a pretty weird way to divide people, isn’t it? Not that we haven’t been doing it since we made fun of the kid in third grade who wore a shirt with last year’s cartoon hero on it. It takes conscious effort to get over thinking that somebody who dresses differently than you really IS completely different from you.

So in the interest of improving global understanding, a few people at a time, a little de-mystifying seemed like a good idea. (Arab readers: forgive me for using these super annoying terms, but stick with me here–I’m trying to address the dumb stuff head-on and help people move people past it, okay?)

Those Nightshirts: Yes, most Saudi men and boys really do walk around every day in what looks to the Western eye like a Peter Pan nightshirt. This is not a national costume that gets put on for the cameras at special occasions. School, work, mosque, the mall, the hardware store buying light bulbs. It’s called a thobe (also thawb). Looks like this:

That’s the “Urban Jubbah Thobe.” The typical Saudi one doesn’t quite look like that–it has a two-button, stand-up collar–but when I saw this one came from the from Muslim Hip Hop Shop I had to use it. No matter the collar style, they’re far from nightshirts. In fact, you can get very spendy on thobes from Burberry and Versace. I’m way in love with the screenshot I got with a search for “designer thobes”: 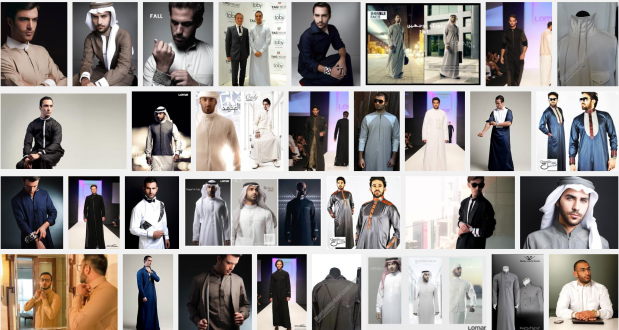 As you can see, they’re not just white, though that’s the overwhelming majority on the street. And in the summertime in Saudi Arabia, white only. Inside the windows of dry cleaners and men’s shops, solid racks of white. For some reason the thobe shops are always lit to about 10,000 candles and are downright blinding at night.

When it comes to thobe-wearing, I TOTALLY GET IT. In the summertime, my preferred uniform is dresses, which I accessorize with a necklace of pity for men wearing pants. What man, legs wrapped in separate columns of fabric all the way to the ankle, seams uncomfortably bunched at the crotch, belt at the waist, doesn’t wish he could be a LITTLE cooler, right? Something loose and breezy, just a light cotton brief underneath? Ahhh. And feet open to the fresh air, with nobody making fun of your mandals. Men in the West have missed the boat on summer wear.

Besides, no eye rolls from your wife about your choice of this shirt with those pants! Nobody snarking about your tie! No fail-dressing, right?

Not so fast. Even donning something so deceptively simple as a thobe carries fashion risks. For one, the pockets. Yes, men everywhere love pockets, and they’re all struggling with the amount of stuff our technological age wants them to carry. Man bag, or pockets stuffed like squirrels’ cheeks? So far, Saudi men are eschewing the man bag, and those bulging pockets at the side seams are not doing the look any favors. Unlike Western clothing equipped with a dozen secret compartments, thobes have only a slim breast pocket and the two at the side seam, and when you load those puppies up there’s just a lot going on. Time to man-bag-up.

Then you get tips like this, from the Shukr Islamic clothing blog:

So yes, men, it’s possible to go wrong, even in one-piece, one-color dressing, doggone it.

And thobes are not one-size-fits-all. The more you pay, the more tailoring you get (up to a point–no need to fear the fit-and-flare), but even in the most basic it’s possible to get it too tight. WAY too tight. As in everything, wearing the wrong size is not, in fact, slimming.

And then there’s the peacock factor. It’s certainly understandable to want to mix something up when you wear the same thing every day, but there’s definitely a point at which you’re trying too hard. (Refer to the “designer thobes” pictures above.) More common, though, is the opposite problem: Not trying at all. Women may dress for other women, but men are a lot less inclined to dress for other men. In a society where there’s no out-in-public wooing going on, no looking good to try to catch the eye of the ladies, you get a lot of slumpy and scraggly out on the street. A lot. I mean really–a lot.

As inviting as the thobe seems, Western men don’t tend to adopt it here. There’s a sense that it’s Saudi dress, and if this isn’t your natural habitat, it’s silly (and possibly offensive) to walk around as if you belong here. Let your Arab co-workers dress you up for a laugh, wear a thobe as a costume to a dinner among Western friends, but that’s about it. Come summer, you have to stick with those pants.

Those dishtowels: (Again, sorry–please stick with me, here.) As high on thobes as I am, I do not understand the headscarf. Generally, you see two varieties around here, the shemagh, which is red-and-white checked: 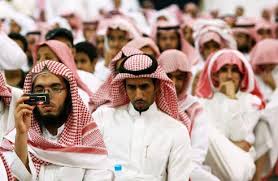 And the ghutra, which is white:

A stretchy crocheted cap is worn underneath to keep it from slipping, supplementing the rope (agal), not always worn but always black.

The headscarf (keffiyeh) served a valuable purpose in desert life, keeping the head shaded, the sun off your neck, and with loose ends you can wrap around your face when dust is blowing (which is often). Genius. I get it. Plenty of my Western friends have taken taken up wearing it on desert excursions. But for today’s city dweller, getting in a car, driving to the office, and driving back home again–the long end down your back, the drapes hanging at the sides and dragging over your shoulders–it would drive me crazy. Not that anyone’s asking.

And it’s complicated. I found this post on all the different ways to wear it. There’s such a thing as a “teacher” style? All I know is it seems every man wearing one is fussing with it most of the time.

Those black crows: (Forgiveness, again, I beg you. I have to work with what I’ve got.) And then there are the women:

Yes, that really is what I see walking around most of the time, with slight variations in the length of scarves and how the face covering is worn. Some wear gloves as well, and a veil completely covering the face. The gowns are black, unadorned, and often longer in the back so that they drag on the floor and ankles are never seen. The veil (hijab) is black, and the face covering (niqab) is a black rectangle with ties knotted at the back of the head.

The intent of the abaya is to uphold the Arab Islamic tradition that unrelated men and women shouldn’t mix, and a woman shouldn’t be seen by a man not a member of her immediate family. In Saudi Arabia, however, it’s more than tradition. Here, religion is law, and all women are required to cover in public, whether or not they adhere to those religious traditions themselves.

Face covering is not required, and is a matter of family and traditional preference. In conservative Riyadh, it’s almost universal. The few Saudi women in Riyadh who have their faces uncovered are usually young and well off, products of progressive families and a Western education, and you find them clustered in expensive restaurants in the trendier parts of town.

The abayas favored by Western women tend more toward these:

Black, but ornamented, with a little som’som’ going on. But not too much:

Zowie. By contrast, this is me “dressed up” to go out to dinner, Saudi style:

My headscarf was tied to my purse, as usual. I’ve put it on only two or three times since I’ve been here, but always have it ready in case someone (an officer from the religious police) tells me to cover. Telling non-Muslim women to cover says a lot about the expectations for men, but for expat women the mantra is to not cause an unnecessary scene, so I’m ready to accommodate. And then unaccommodate when the busybody who spent the afternoon scribbling out women’s faces on detergent boxes is gone.

I realize we’ve crossed a line when “religious police” come up as I’m trying to elevate an often insulting Western vocabulary and de-mystify the unfamiliar. But if you think about it, the officer with his beard and his frown and his stick is really no different than the kid who relished being the hall monitor in elementary school, threatening to write up his classmates if they didn’t obey him when he said to walk. See? Deep down, we’re the same the world over, even if we don’t all put our pants on one leg at a time.

22 thoughts on “Desert Duds: A Primer on Saudi Dress”