A friend recently posted this on his college daughter’s Facebook timeline:

I know, right? It’s DARLING. I couldn’t resist chiming in:

They don’t actually start out like that, either. That was a picture of an alpaca. Camels start out more like this:

Still cute, but not a face that’s going to take over Facebook.

Being in Saudi Arabia means being in the land of the camel. The camel has been food, shelter, transportation, and the symbol of wealth here for thousands of years, and the heritage is still alive. 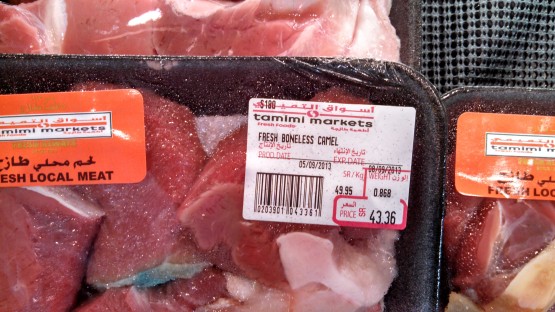 How can I walk by that? I handed the package of camel stew meat to our wonderful butcher and asked for it to be minced. (You don’t buy ground meat here if you don’t have an appetite for some nasty, gummy, gluey fillers. Buy cubed meat and have them grind it fresh.) He cocked an eyebrow at me, the pale girl with her head uncovered. “Is camel? Yes?” I smiled back and nodded. “Yes, indeed!” He gave me a delighted grin, a thumbs-up, and presented me with my ground camel a few minutes later as if it was his own personal gift.

It was terrific. A camel burger is different from a beef burger in the same way a bison burger or an elk burger are different. Definitely less fatty. Before forming the patties, I added a handful of crushed potato chips to the ground meat (a tip I learned from a “meat science” expert I heard a few years ago), then grilled them in a pan. Yum.

I was less pleased with camel cheese (on the left):

As I described in an earlier post, the best way to get an idea of what dried camel cheese tastes like is to take a piece of chalk, roll it around in a pan of milk long enough to soak it thoroughly but not so long that the chalk starts to dissolve. Then lay the piece of chalk on the windowsill for a day or two until it’s good and dry again and the milk has soured. Eat it. Now you know. For better or worse, the Bedouin have lived in the desert for generations on camel’s milk and dates. Good for you, is about all I can say.

But now we’re in the commercial age, so of course camel products have expanded to include camel branding. And let me assure you, camel-theme products are everywhere: camel t-shirts, camel tote bags, camel mugs and salt shakers and ashtrays…and my particular delight, the Dancing Camel:

Kinda like Ireland with leprechauns. But there’s a big difference: Camels actually exist. (Sorry, kids.) And unlike real koalas in Australia or real movie stars in Hollywood, real camels are easy to run into. Literally:

Camels on the road

That’s the road. With camels in it. Since we had to stop anyway, we got out and made some friends.

Camel kisses (P.S. These were taken a few months ago and I spent a lot of time with horses as a child, so be kind to me.)

I am…The Camel Whisperer. (You’re supposed to say it really softly.) So much so, in fact, that we had a hard time leaving. 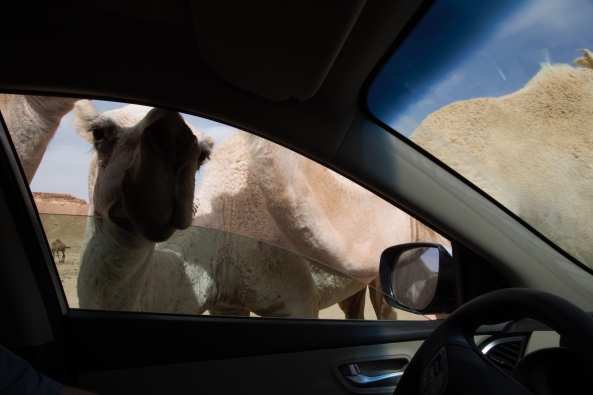 Camels at the car window

Camels are arguably ugly and smelly, but they are also strangely graceful and powerful and noble. That is, when they’re not being funny:

But these are the last of these kinds of pictures you’re going to see from me for a while. After a lot of high-probability speculation for a year or so that the deadly MERS (Middle Eastern Respiratory Syndrome) virus had its source in camels, it’s gotten definite. A patient in Jeddah had a 100% match to the virus found in his camel. Not rocket science, people. The risk may be low for someone in casual, passing contact with them, but nevertheless, we’re going to enjoy our camels at a distance from now on.

But the story has taken a very different path through the press and the public consciousness here than I would expect in the West. If, say, a fatal goat-source virus were to be suspected in the United States, I shudder to think what form the national crisis would take. (And we don’t even have that many goats around.) Breaking news! Headlines! Lead stories! Goat roundups! Exterminations! (And protesters.) At the very least, I’m pretty sure you wouldn’t be seeing goats in children’s petting zoos. But here, ladies and gentlemen, I give you camel rides at the Jenadiriyah cultural festival two months ago (February 2014):

The kiddies were lined right up.

On April 19, the Washington Post called on Saudi Arabia, for the sake of world health, to report “openly and honestly” about what they’re doing and seeing with the virus as human-to-human transmission has been documented and cases appear elsewhere in the world among travelers to the Middle East. The same day, a Saudi paper published alleged notices from the Ministry of Health threatening imprisonment to health workers who divulge ministry information.* Still just alleged, but I’m not skeptical enough to avoid putting it here. After all, I saw this report a few months ago about people getting sick after eating vegetables irrigated with sewage (no farm sources named, no grocery stores identified, no recalls), which establishes a pretty good precedent for public health whitewashing.

I love this picture. This man welcomed us to meet and take pictures of his camels. He represents a lifestyle thousands of years old, and lives it still. Tradition should be honored, remembered, and preserved. But progress and the modern world don’t care about tradition. To live in the modern world people have to choose to either compromise their traditional ways or preserve them as museum pieces they witness and celebrate but don’t use. Option three, living traditionally in the modern world, doesn’t exist.

But that hasn’t stopped Saudi Arabia from trying. Right now, it keeps one foot firmly planted in the ancient world–maintaining a Bedouin family and tribal structure, confining women as if defending them from desert raiders. The other foot is permanently established in the modern world, with its people leaving the desert to live in cities, its oil economy demanding engagement in global commerce. With every day that passes, the ground under the two feet moves farther apart. If those feet stay attached to the same body, my experience with Twister tells me a position like that can’t be sustained indefinitely.

The consequences of living so closely with camels, and then refusing to consider whether a larger problem has sprung from it, may prove to be an allegory for what happens from doing the same with old ways. I hope not. I hope this disease goes no further. I hope I can still see a camel race. I hope I can meet more camels in the desert. I hope Bedouins who choose to cling to desert ways can continue to have a survivable way to do so. 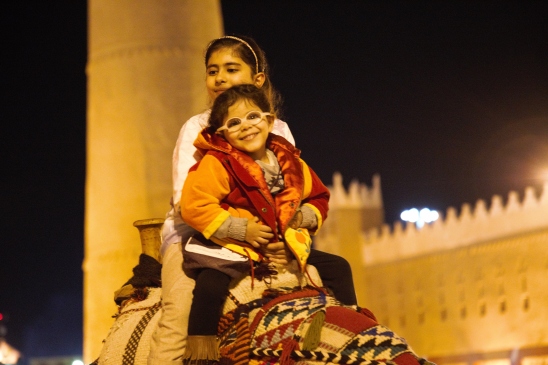 But more than that I hope these little girls and their millions of peers can one day get an education that prepares them to keep up with advances in global technology and international affairs. I hope it enables them to think critically and creatively. I hope their parents can find a way to acknowledge and address problems honestly. For that, I imagine we’d all sacrifice a few camels.

UPDATE: Late in the same day I published this piece (April 21), the Saudi Minister of Health was fired, but not before reports started to appear that doctors had been told to report MERS deaths as “heart failure or other illnesses.” The traditional Saudi way does not include openness, frankness, and a head-on approach to solving problems. We have no choice but to hope that the change represents, well, actual change.

*To keep track of the latest MERS news and regional public policy, my go-to English-language Twitter sources are Wall Street Journal Saudi Arabian correspondents Ellen Knickmeyer and Ahmed Al Omran. To watch epidemiological research and conversation, I’ve been fascinated by developments being tracked and analyzed by virologist Ian M. Mackay. Like this: 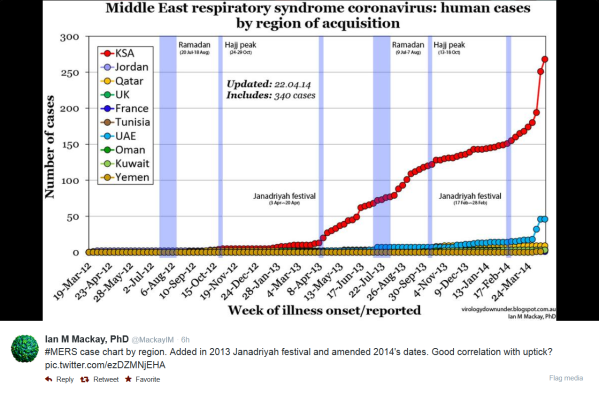 One thought on “Camel Kisses”