With this handy etiquette chart, you can be active on social media and STILL HAVE FRIENDS at the end of the presidential election season!

A couple of years ago, I was in Istanbul the day before mayoral elections that were being watched as a bellweather for upcoming national elections. I don’t speak Turkish. I couldn’t properly pronounce the names of the candidates. I didn’t understand a word of the slogans or songs I heard from loudspeakers blaring from passing vans and trucks. I confess that living in Saudi Arabia had given me certain opinions about what kinds of choices the Turkish electorate might want to think about v-e-r-y carefully, but I didn’t presume to actually know a darn thing. 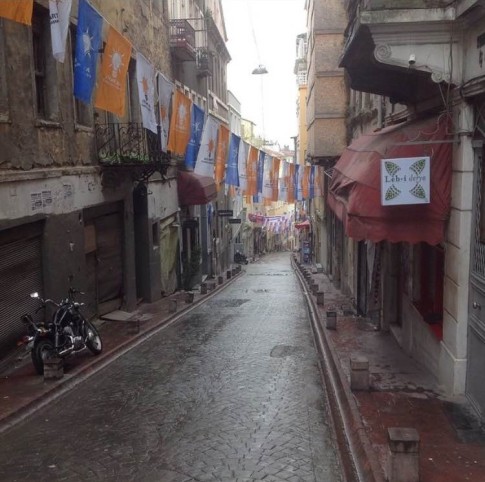 I find myself equally lost in my own country right now. I have no explanation for what’s going on in the American presidential election, so don’t ask. I read, I listen, there are a thousand theories that all come together as “it’s complicated.” So I’m going to stick with what I do know, which is

First, my credentials: One check in my checkered past is that I have done time as a social media professional. That’s right. I received pay. My job was to lurk on social media for clients wanting to know what people were saying about them. It was super creepy. And at times, super fun. For example, I got to watch a full-blown, top-to-bottom family brawl play out on Facebook over who should or should not have been at a funeral because of what somebody did or didn’t say to somebody else’s mom ten years earlier, and what she did or didn’t say in response, and who had never really cared and had no right to be there and…honest. It went on for pages. All on Facebook. People. (Eyeroll.) And their sloppy privacy settings. Amirite?

YouTube brought me a family filming their child’s birth, in individual clips, from the moment mom entered the hospital, which were addressed to the kid. “You’re almost here, Drakey. We just love you so, so much. Mommy’s getting ready to push now. Are you ready? We can’t wait to see you.” YouTube. Publicly. I swear.

Twitter was also reliable entertainment, Let’s start, perhaps, with a good reason to decide maybe you don’t want to be a pop star, after all: 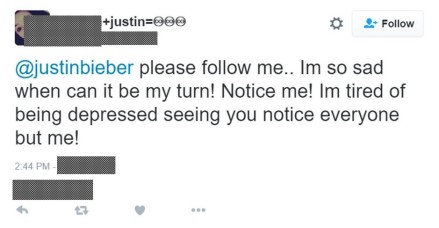 Don’t fail to notice, by the way, that her profile name is her name “+justin.” But that one was a few years ago. Perhaps she’s outgrown this phase. And I hope she hasn’t grown into anything like this:

I sense a connection between her two problems, amplified by the way she’s tweeting about them at 12:16 a.m. Perhaps it all started with an attitude like this one:

I called that one “narcissist of the day.” It was closely followed by “lonely heart of the day”:

Perhaps you’ll note the use of the term “lone wolf,” which this person complaining about no one paying attention to him has chosen to describe himself.

Do you see the problem? Improper use of social media makes people laugh at you or just not like you. So I want you to listen to me now. After all, I’m a professional, and I’m here to help you. I’ve seen what people can do to themselves on social media.

As I write, the first American presidential debate is just ahead of us, and after two years of posturing and speculating and arguing and name-calling we have only a few weeks left until the election. After that is an unknown period for decompression and venting, so all together you have more than enough time to completely trash your relationships. In public, most of us have reasonably functional social filters, but social media is another matter altogether. The problem, seems to stem from a failure to understand your audience as easily as you do in person.

So, since nobody else seems to be doing it, I’m gonna help y’all out. I have created this handy chart you can use to make sure you’re expressing the right part of what’s in your mind in the right place. When you’re thinking, “Somebody needs to nuke all the [fill in your group of people or pets of choice],” stop. Just stop. Check the chart. Then think, “No, I will SAVE that genius comment for when I’m talking to people who want to hear it.” Aren’t you glad? The rest of us will be. And you might end the year with more real-world relationships still intact. Here goes:

See how simple? You can do this! Your country needs you. Your friends need you. I need you. Be nice out there. Or so help me, I’m on my way out to be a foreigner again.