It’s Memorial Day weekend in the U.S., a holiday begun to commemorate those who died while serving in the armed forces. It now involves military tributes, graveside services…and barbecues. Summer has begun! Memorial Day weekend is when swimming pools open, summer programs begin, the school year ends, and the upper crust don their summer whites.

On every Memorial Day weekend I become a Hoosier for a few days. Our family lived in Indianapolis during the central years of our children’s lives, so Memorial Day weekend is Indy 500 weekend. I tie a checkered-flag necktie on the dog and spend Sunday afternoon watching what look like Hot Wheels cars zoom around an oval track for a couple of hours. This year’s winner was decided by a few drops of fuel, and his car sputtered to a stall before he could finish his victory lap. The car had to get towed to the victory circle, as a final testament to the way there’s no such thing as an individual sport. 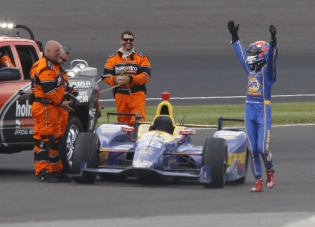 Alexander Rossi, happy victor, with tow crew at the 2016 Indianapolis 500.

Memorial Day weekend is also when it’s generally considered safe to plant a garden in my part of the country. We’re a tad high, by global standards (6000 feet/1800 meters). I won’t be losing my garden to rising sea levels, but many a fully planted garden around here has been lost to a late freeze. So Saturday morning, under a sunny sky, the Beloved and I loaded up hefty bags of garden soil, and potting soil, and bark mulch, and flats of bedding plants. We dug out perennials that needed to be divided, with their great root balls, mixed soil, planted pots, spread mulch, repaired sprinklers, and dug out a dead tree. And collapsed.

Still life: Deck with herbs, flowers, and the Beloved’s foot

This is normal in the U.S., and utterly inconceivable in a sizable portion of the world. I struggled with this difference in Saudi Arabia. I am mired in a personal responsibility mindset, where my mom taught me early that I needed to clean up after my own damn self. The net result is that I’m really uncomfortable about having somebody do for me what I can reasonably do for myself.

In Saudi Arabia, and in many of the Asian and African countries the workers come from, manual labor is to be done by people who do manual labor. There are no giant home improvement centers because retail shoppers aren’t supposed to be the people that do the work requiring those supplies. Paint? Lumber? Plumbing supplies? Don’t be ridiculous. The classes are fixed. Workers get that stuff at shops in their own part of town. If you’re in the classes that don’t do the work, you DON’T DO THE WORK.

Take this Arab News article, for instance, in which officials had to explain that, contrary to an appalling rumor, sanitation work was NOT being done by Saudis. Heavens, no! That was just a job classification. They’re actually executives. Please relax.

Or another (in the Saudi Gazette, according to my notes, though I can’t find it now), in which an editorialist was bemoaning the current pension rates. He talked through a hypothetical retiree’s budget, showing how impossible it was to pay for food, rent, a driver, and a maid. What are these people to live on?!? A maid is as basic to human survival as food. And by “human” we mean “people who are not expected to do labor.” Because they ain’t nobody talking about what the maid survives on.

While I lived in Saudi Arabia (and some since), I kept seeing alarmist references to a “maid crisis,” which seems to be the product of a growing Saudi population, a shrinking pool of third world countries willing to export enough single women, and *gasp* rising wages! (Household maids, under the current post-slavery model, are expected to live in, work 6 ½ days a week, be available at all hours, and receive about $250 a week.) Now, people who have never had (or wanted) a maid might find that term to be a bit oxymoronic. I mean, how can something you don’t need ever be connected to anything you could call a crisis?

HA HA! These hilarious other people! But now that I’m in the U.S. again I’m starting to see weaknesses in the “I can do it myself” mentality of American culture. If I fell and hurt my back while trying to clean my gutters, my neighbors would step in, organize meals, make sure somebody was around to take me to doctor appointments. But when the crisis passed, we’d go back into our houses, roll down our garage doors, and return to doing things for ourselves.

In Saudi Arabia, that would never have happened. Loku, my gardener from Nepal, whose help I felt awkward about receiving because I can clean up my own damn garden, shared pictures of his wife and two children with me. He would show up with plants he thought I might like, and celebrate with me when he managed to coax the green back into my bleak lawn. When the earthquake struck Kathmandu, I waited by the door to find out whether his family was okay. I referred him to neighbors for extra work. He noticed and commented if I wasn’t home the day before. When I told him we would be leaving Saudi Arabia permanently, he looked stricken, and had to confirm several times to make sure he wasn’t misunderstanding my English. On our last day, as the boxes were being taped shut, he came to us with a hand on his heart. He patted the spot again and again while looking in my eyes. “Never forget,” he said. “Never forget.” And my heart broke. 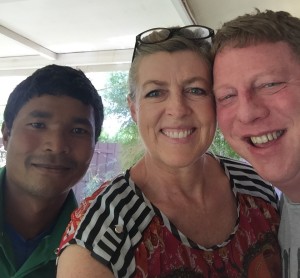 I hated the social stratification there, the classes, the roles of servants and masters. But I loved the daily reminders of how acutely we needed each other. I was utterly unable to buy four sticks of raw lumber to make a stretcher frame I wanted. (I’m no crafter, but, sheesh. This was a no-brainer.) For that, I had to call a carpenter into my home, consult with him about the size and draw a picture of what I wanted, then wait for him to bring the finished product back to me.

The needing. That’s what’s easy to forget in the U.S. We live under an illusion of self-sufficiency. As the checkered flags signaled Alexander Rossi’s win at the Indianapolis 500, his (very large) team leaped off the barricades in pit row, hugged each other, danced as well as middle-aged white male auto mechanics can (lots of jumping up and down with hands on each other’s shoulders), and the driver and car gradually slowed and drifted to a stop a mile away from them. Alone, Rossi got out of the car and waved his hands, but he had to wait for somebody else to come drag the fuel-less car to a place where he could be embraced by the team members who’d kept him in the race all along. In the winner’s circle, the wreath and the cheering was for him, but the tow had been a bit of a reminder of how helpless we really are on our own.

Happy Memorial Day,  y’all. It’s a good idea to have a day to remember the shoulders we stand on. And to acknowledge how silly it is to imagine we stand there alone.