I love intersections, when things coming from different directions cross each other, and the interesting things that happen to both of them when they meet each other. You know, like those couples where you can’t figure out why they’re together and you spend a lot of time wondering what their first date was like, or what they’re like when nobody’s around. (Too creepy? Is that just me?) A chimpanzee playing with a dog. Baking soda and vinegar. The existence of such a thing as a mule.

I captured one of those intersection moments last summer in Paris, on our way back to Saudi Arabia from the U.S. We were sitting on a fountain in front of the ancient cathedral of Saint Sulpice when I saw this: 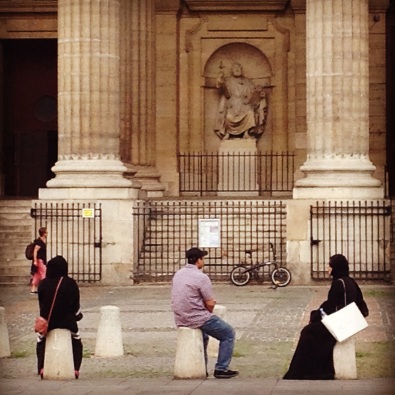 The intersection between the Arab and the Western worlds is a messy one. The signals don’t work well, no one seems clear on the rules, and there are a lot of accidents. But I’ve taken great delight in a recent story in the news where the intersection works flawlessly. The understanding is perfectly aligned and the parties join in the roundabout as if they don’t ever want to leave. Did you see it, too? 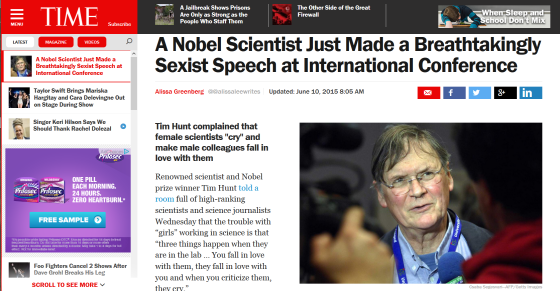 Tim Hunt, an English, 72-year-old, Nobel prize-winning, knighted biochemist speaking at a conference in Seoul, Korea, expressed an opinion that men and women should work in gender-segregated labs, saying, “Let me tell you about my trouble with girls…Three things happen when they are in the lab…You fall in love with them, they fall in love with you, and when you criticize them, they cry.”

Reaction was swift and outraged. The esteemed great thinker has stood by his remarks, and has been forced to resign his positions both as an honorary professor at University College London and as a member of the Biological Society Awards Committee of the Royal Society. Yes, it’s always satisfying to see just desserts served up, but the turn in the story that has given me particular delight has taken place in the Twittersphere, where female scientists have been posting pictures of themselves at work, explaining how they are #DistractinglySexy. 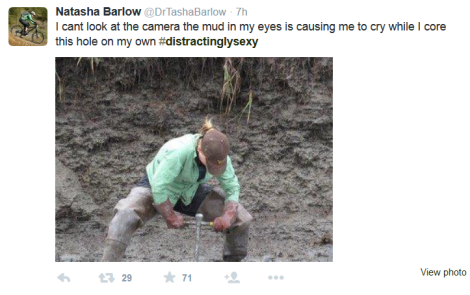 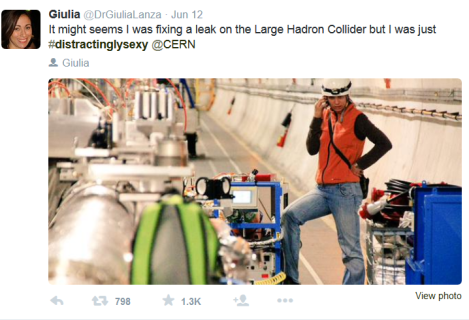 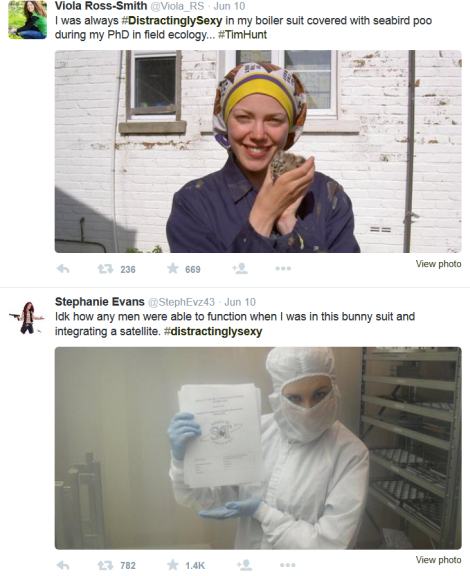 I could post dozens and am just posting a few, but had to include this one: 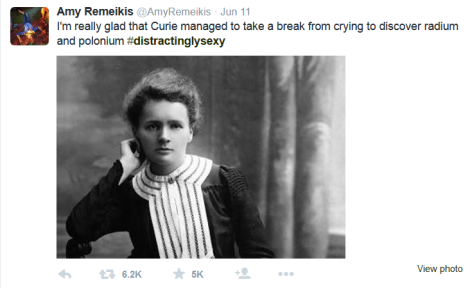 Now check the beautiful connections between this story and some of my favorites from Saudi Arabia. There’s this one, in which a Saudi preacher stepped into a firestorm by suggesting that it wasn’t mandatory for women to wear the niqab, or face veil, and was told (among many other things) “If you enjoy looking at other Muslim women then it means something is wrong with you!”

Or this one, in which an 11-year-old girl was criticized for appearing uncovered in a children’s National Day performance last summer. To clarify, children are not required to cover by Saudi custom, but the more conservative the eye, the younger the line tends to be for who’s no longer considered a child.

And a special pet of mine, this article, which reports that the Saudi religious police may require women with “tempting eyes” to cover. No clear identification of which women should be mindful, just reservation of the right of any officer to force any woman to cover her eyes, “especially the tempting ones.”

Or should we say, #DistractinglySexy?

Ah, this is a beautiful moment, isn’t it? A man of science with a staggering education and his name etched on the highest prize the world has to offer, dedicated to the life of the mind, skipping hand in hand through sunshiny fields of buttercups with men who will “nullify the effect of the black magic” in a sheep’s head.

You can’t make this stuff up. And I didn’t.

Men, throughout history and in every walk of life, have thought they have a women problem. They really, really, really like women, and think it would be SO MUCH EASIER to conduct daily business if they didn’t have to see this thing they REALLY REALLY want in front of them all the time. You know, if the whole world was like a fraternity. Or the army. Or prison. Places where things are always AWESOME and men have NO PROBLEMS AT ALL and all their ideas are GREAT.

Fueled by their big muscles and testosterone and all those great ideas, male thinking seems to have coalesced around the notion that the world is theirs. Women inhabit the world, and are therefore also theirs. Why else would the esteemed Mr. Hunt think women need to exit the male space of the laboratory, rather than that he should exit theirs? Within this worldview, women are granted carve-outs, similar to fenced pastures for the (owned) livestock and kennels for the (owned) dogs, where they can enjoy certain freedoms within the otherwise male-owned world. In Saudi Arabia (the starkest representative of the Eastern world and the one I know best) those spaces are girls’ schools and family sections in restaurants and underneath black robes. In the west, beauty parlors. Craft stores. Restaurants that serve a lot of salads. Men who spend too much time in the spaces carved out for women (fashion designers, florists, artsy types) are not real men. Women who step out of those places are in open range territory and are either invading male space or declaring they’re available for an enterprising man.

Whether the thinker is this rocket scientist coming from the East who said “There is a gene called the ‘queen bee’ in every woman. So…she will not stop stinging if only to be true to her own nature” or the rocket scientist (okay, biochemist) coming from the West who said “Let me tell you my trouble with girls,” they’ve come together so perfectly in the great Roundabout of Alpha Males that you can’t tell them apart.

So, Western secular men, get off your high horse of thinking you’re sooo much more evolved than your Eastern cousins. Eastern Muslim men, who think you’re sooo much holier than your worldly capitalist cousins from the West, stop being so insecure. You’re the same. And you’re both on pretty shaky ground.

Oh–and women everywhere, let’s stop apologizing for being #DistractinglySexy and claim the world that always has belonged to us, too.

8 thoughts on “Where Dude Meets Dude”