The weather has turned! The three-digit temperatures (ahem, 40+ in centigrade) are gone. Winter in Saudi Arabia means breakfast on the patio, dinner under the twinkle lights in the garden, evenings by the pool, afternoons with the windows open listening to the birds. Sure, there are a lot of things you might be used to doing that you can’t do in Saudi Arabia, but don’t forget that one of them is “shoveling snow.” Another is “wearing coats.” Another is “scraping your car.” Shall I keep going?

I expect my British friends will start getting lots of calls from their relatives wanting to visit if this story proves true:

Meanwhile, it’s time to plant my garden. I started before I went on vacation at the beginning of the month.

I’ve never had great luck leaving my plants with others when I go out of town. This time, I came back to find my babies mostly gone. Not dead. Gone. You know what that “SM Tomato” means? San Marzano tomatoes, from seeds I brought back from Italy. My babies! These are not seeds that failed to sprout. You can see the picture–I had sprouts! When I asked the gardener what had happened, he shook his head. “Birds,” he said. Birds? Eating sprouted seeds? And we’d put a window screen over the seedlings, resting on the markers. He pointed at the space between. “Little birds,” he said. “Under, eating.”

Yeah, remember where I just talked about having the windows open and listening to the birds? Those delightful European songbirds that have just arrived to spend the winter here? Oh, it’s war, now. Because the garden seedlings aren’t the only things that need autumn attention. Behold my lawn, post-summer: 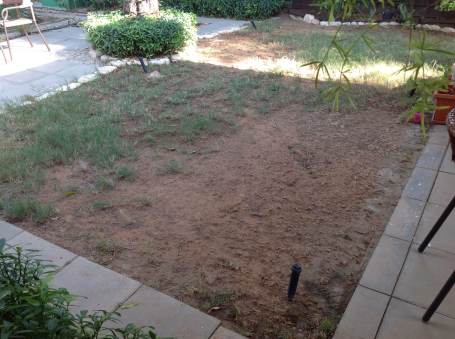 Yes, my garden is one old tire and a chained dog away from a junkyard.

Meanwhile, outside my fence, the grass looks like this:

That’s “number one grass,” which would be lovely. This stuff is heaven. It’s too thick to get your finger down to the soil, grows slowly, and is impervious to heat and sun. What it’s NOT impervious to is shade, which I have a lot of. Weird, I know, in a desert, but between the orientation of the house, the patio cover, my tree, my neighbor’s tree…not a lot of sun gets through. Add the heat, and the soil becomes very alkaline, which isn’t good for anybody. Plus the good stuff is expensive, so I’m no way going to pay to sod the whole garden (in a house I do not own) with this stuff.

No, I think I’ll take the advice of the nursery owner: “Grass is cheap. Every fall, plant more.” Seed it is. Yeah, the bird wars are on.

Now let me clarify “nursery.” Most plant sales around Riyadh happen at roadside stands. A pipe framework, a tarp, maybe carpet scrap or a piece of astroturf on the ground, and a mashup of plants. These little stands clump together, souk-style, in groups of a half dozen or more, so that the collection looks like one good-sized garden center, but each little stand is separately operated by a guy doing his best to scratch together a low-tech, cash-based living.

(Right here is where a picture would go. But until I started writing this, it never occurred to me to take one. And now, since I can’t, you know, drive, I can’t just pop out and get one. And Google failed me. Use your imagination.)

The individual stalls each carry the same stuff, with one guy having his stack of potting soil bags, the guy next to him having his, and so on down the line. I’m not sure what makes me choose this guy’s potting soil over that guy’s. Then there are marigolds, some different marigolds, and some more marigolds. Petunias here, here, and here. Most Saudi homes have a concrete courtyard rather than a dirt garden, so most of the merchandise is geared toward pots.

In addition, Saudi Arabia does not have a do-it-yourself culture. There are no Home Depots or Lowes. In Saudi Arabia, labor is cheap, and the preferable path is to have somebody clean/fix/cook/drive/tend the plants for you. Therefore, the customers of these garden stands are usually other foreign laborers, there on somebody else’s errand.

UNTIL you get to Beautiful Garden. This is a traditional nursery, with greenhouses and the works. Our compound plans a couple of outings there as soon as the weather cools and Westerners accustomed to having flowers and greenery start eying the outdoors. Beautiful Garden is located along the Wadi Hanifa, a riverway that carries water on the few days each year when there is some. There’s foliage, and birds, and (shocking!) walking paths, and the original Riyadh settlement was there.

Today it’s lined with royal palaces, so you see a lot of walls and razor wire and and tower cranes. (Yes, tower cranes. Go ahead–imagine the house that requires TWO tower cranes during construction.)

The owner of Beautiful Garden puts up tables in the shade of the main garden and lays out an enormous Lebanese breakfast buffet for the ladies on the compound bus. Lots of hummus and tabouleh and stuffed things and spicy things in dough. 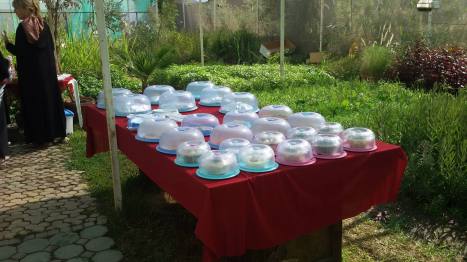 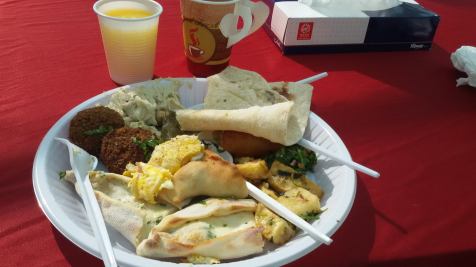 Allow me a racist moment: As far as I can tell, Lebanese people have a social gene. If you have a Lebanese friend, you’ve just opened a gate to fifty more friends. So he welcomes us with open arms. Eat! Be happy! Enjoy the flowers! Shop! No one leaves until the food is gone! I did my part. My husband, arriving home that evening, kept his distance. “What did you have for lunch?” he said. Oh. A stuffed grape leaf or two might’ve been involved.

Then we wander the greenhouses. 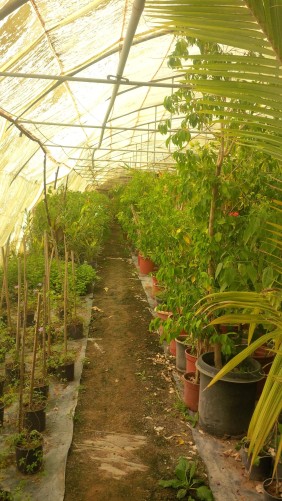 Remember how I said labor is cheap here? Yeah, you don’t roll along with a cart, looking at plant labels and choosing which ones you want. No, a guide leads the way, explaining the plants, and if you decide you want something, he waves a laborer over to pick it up for you. At the end, you find your pile and pay. 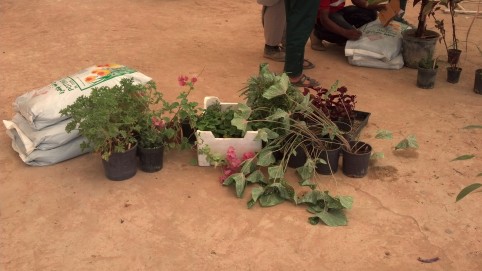 You know what’s even cheaper than labor? Gas. (Just under $.40/gallon or  about .06 euro/litre.) So after you and your friends are finished shopping, you can carry your stuff home on the bus if you wish, or they’ll deliver it, clear across town and through nightmarish traffic, a few hours later, for nothing. In a country where half the adult population doesn’t have independent transportation, every once in a while you run into some tender mercies of accommodation.

Yup, sometimes life in Riyadh can wear you down. But right about now is when you get a pickup. The bougainvillea is coming into its peak and things I don’t know the names of are blooming like crazy. I’m ready for the bird wars. It’ll totally be worth it.

*This was NOT a paid promotion, but I know I’ll get people asking how to get there, so here it is: A wonderful reader (in the comments below) gave the GPS coordinates at the front gate as 24.704236, 46.604171. To get to the general neighborhood, take King Abdullah Road to the roundabout where it ends against the wadi, then head north for 2-3 kilometres. The driveway up to the garden center is on your right. If that’s not enough, here’s Mr. Hasbini’s business card, showing email contact and phone numbers for other retail locations:

7 thoughts on “The Winter Garden”