I been gone. Real gone. (Sing it! You know you want to. I’ll let you get it out of your system here without cartoon cars.) My gone-ness for the last two weeks was part of a national exodus of Saudi-dwelling expats for the Eid al Adha holiday (Hajj pilgrimage season). Most of us get about a week off as part of the holiday. Another (Eid al Fitr) comes at the end of Ramadan (it was two months ago, just before I arrived), and we had a one-day “National Holiday” between the two, and…you’re done for the year. Two separated weeks and one day crowded into just over two months. None of those three-day weekends Americans are so fond of, no streak of fall holidays, no Christmas, no spring break, no summer vacation.

So both the expats and the Arabs take off when they can. The easy destinations nearby in the Gulf are jammed because the entire Arab world has the same holidays. Then there are the next-step destinations in Europe–Paris, Frankfurt, London, Madrid, Rome. (Most non-stop European cities are about 5 hours away, so Europe is not an exotic destination from here. It’s low-hanging fruit.) But everybody goes somewhere. Daily life in Saudi Arabia is grinding enough that you don’t skip an opportunity to get away. There’s no such thing as a “staycation” here. No movies, museums, music, art, scenic or historical sights, parks, sports, recreation…nada. So you watch TV at home through the workweeks and devote your entertainment/sanity budget to travel.

We went to Bali.

I know that sounds impossibly remote for people in the States, but it was manageable from here–about the same as a New Yorker going to Hawaii. Australians go there the way Americans go to Mexico (see map; Bali is just off the east end of Java). For them, it’s a cheap, accessible place to get drunk and lie on the beach.

And though we were there for the food, we weren’t for the clubbing. So we skipped the Cancun-esque resort scene near the airport in Denpesar and headed out across the island.

Bali is one of 17,000 islands in Indonesia. (I think they counted every rock in the water to come up with that number.) While Indonesia is a predominantly Muslim country, Bali is almost entirely Hindu (allowing for a nominal number of Buddhists, Christians, and finally Muslims). So I left a completely foreign Muslim society to go to an equally foreign (though at least open) Hindu one. And the Hinduism is visible everywhere: Every home has a personal temple on the property (a few shrines for daily offerings), every family group has a family temple, every village has at least three (north, east, and center), the island has directional temples and water temples for special use, and we soon discovered that the ceremonies we counted ourselves lucky to see on our first few days weren’t unusual at all–we saw ceremonies every day. Births, deaths, cremations, weddings, childhood markers, full moon, village ceremonies, family ceremonies…there’s always something.

Early on (while we still thought we were catching ceremonies by incredible good fortune), we found ourselves at the “water temple” on Lake Bratan. The scene was breathtaking–flags, flowers, baskets, banners, streamers.

The women were bringing their offerings.

A gamelan band started to play.

(You can see who’s in charge here, right? And yes, video would’ve been nice but failed to upload after multiple attempts. Sorry.)

As we left, I heard a muezzin growling out the call to afternoon prayer from a mosque farther up the road. I could still hear the music. I looked back over my shoulder at the scene behind me and thought, “Dude’s sure fighting an uphill battle.” 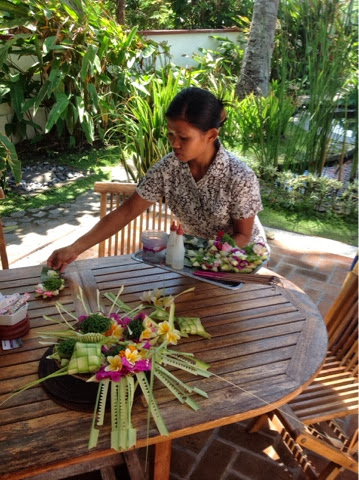 Hinduism defines the Balinese. Devotion is omnipresent. You find daily offerings (a palm-sized basket woven of palm front strips and filled with flowers and a dab of fruit or rice, accompanied by a stick of incense) in front of restaurants and businesses, outside homes, at every shrine along the roadside, on sidewalks and at intersections. A woman working at one of the houses where we stayed taught me how to make some. I’d seen her placing offerings around the property in the mornings, and asked how many she made and put out every day. “Here?” she said. “Twenty. Fifteen at my house.” Hand woven baskets, flowers, rice, incense. So many little handmade baskets that dry up and are brushed aside every day, then just replaced the next day. Thirty-five a day, every day. (The pile in the foreground of the picture is the work product of the offering-making lesson. The little one being placed on the table is the daily offering; more are on the tray. Each one gets sprinkled with water, too, which she carries in the cup and the squirt bottles.)

One of the things I love most about travel is discovering things that are utterly different. Like most of the stuff in this fruit stall:

(These were filled with fig, I think. I also saw “chokolat,” which I was able to figure out for myself, and another with a picture of grass. I’m upset I never got another chance to try those. If you ever see them, in any flavor, buy them.)

But I’ve started to discover that I love, just as much, discovering things that are the same. Talking to a Balinese taxi driver with a bare minimum of English, a father of three little boys. “Noisy,” I said. He nodded emphatically. “Much fighting,” he answered. Yup. I know how that goes. Another father shook his head about the “free” public education his children were supposed to be getting, after he pays for uniforms, books, and school fees. Been there, too. An Arab woman in the airport in Dubai saw me smiling at her three-ish year-old daughter taking the universal pose of a tired child–tilted forward from the hip, head thrown back, arms dangling as if they’re Just Too Heavy to be borne another second. She gave a half-smile back at me, rolled her eyes, and shook her head. We both know what it’s like, right, sister?

Our return itinerary took us a smidge out of the way, and we found ourselves in the in the Egyptair lounge in Cairo in the early morning hours. My social-media problem-solver self wanted to tweet how really, really gross the place was, but then I thought, “I’m in Cairo, for heaven’s sake, where these people are suffering, and I’m going to bark about how the sausages and boiled eggs from last night had been left in an unplugged chafing dish?” Flying in, it was immediately apparent how desolate that airport was. None of the typical hubbub of an airport tarmac–no trucks, baggage trams, people scurrying around. Only one plane that wasn’t Egyptair’s. So I kept my yap shut and considered my good fortune.

I went out to the woman at the front desk at one point to ask when the restaurants might open, and after she told me, she said, “I’m sorry, I know this is awkward, but can I ask your advice about something?”

I may not have quite looked like that, but you get the idea. And let’s be clear: I hate giving advice and my children will confirm that I avoid it at all costs. I would rather eat at Applebees than give advice. And as I’ve said before, I’d rather eat a granola bar out of the glove box than eat at Applebees. So the hierarchy goes like this:

But this young brave Egyptian woman plowed on. The problem? Her fiance kept getting things stolen. A car a few months ago. Then a mobile phone. Then another mobile phone (which she had gotten for him) had been stolen last night. She felt terrible for him, and was trying to figure out how to comfort him because he seemed inconsolable. The phone didn’t matter, she said. She didn’t care. But she didn’t want him to feel unlucky or like bad things were meant to happen to him. That wasn’t true–he was the best man she’d ever known and she loved him desperately.

The differences? She was wearing a headscarf. She lived in Cairo, where having things stolen was probably part of the fabric of daily life. And in the “insha’Allah” (“God willing”) Muslim world, it’s a rational thing to wrestle with the question of whether one is meant for trouble, which is a concern I doubt would ever cross an American’s mind. The similarities? The sense of helplessness in the face of a loved one’s suffering is universal, as is the desire to take it away. And from the position of a woman old enough to be her mother, and having been down this same road a few times, I was able to tell her what I’d learned about bearing one another’s burdens: Faced with another’s sorrow, we all wish to fix it, to take it away, but such things are impossible. There is, however, great power in shared grief, in merely standing beside someone who feels alone in his troubles.

I doubt it added up to much. I think she was pretty well resolved to buy him another phone, so my advice went to its best use. But from a million miles away, culturally and geographically, we were able to stand beside one another for a little while on a dark morning. And when she sought me out at the end of her shift to share a hand clasp and express her gratitude, I don’t think either of us felt foreign at all.