I’ve been putting off this post for some time because I didn’t have the sufficient video or photos to do it justice. I’ve finally concluded I will NEVER have sufficient material to do it justice. The topic? Driving in Saudi Arabia. This is one of those “gotta be there” kinda things. But I have to try.

Necessary background: In Saudi Arabia, there’s no need for a steely moral core. You don’t have to choose to fast during Ramadan; it’s illegal to eat in public during the day and restaurants are closed. By law. You don’t have to choose whether your principles allow for Judd Apatow movies; theaters are forbidden. A man doesn’t have to discipline himself to not stare at women; they’re kept behind walls or draped in black so that they can’t be seen. (Thus all the staring, obviously.)

If you really want people to not do something, it’s up to you to stop them. For example, according to this article, 86.5% of Saudi men blame makeup for molestation. Yes, that means they’re saying that fully covered women wearing eye makeup are asking for it. Math students: That’s nearly 90%. They also blame “poor religious sentiment,” a lack of anti-molestation laws, and the absence of warning signs in public places. Everything is to blame, it seems, except the perpetrators themselves. It is up to the women themselves, government, religious institutions, and the public places enabling the sexes to mingle in the first place to make sure men behave appropriately. Stop me, men say, because SURELY I can’t be expected to stop myself.

Need more proof? I just saw an editorial in which the writer complained about Saudis wasting food, then at the end of the article acknowledged that Saudis may have a hard time regulating themselves to stop that appalling, un-Islamic behavior. The solution? “That is why the government should pass strict laws based on fatwas [religious edicts] to curb this practice.” That’s it—a law. This is a staple in local newspapers—an editorial complaint about bad behavior, coupled with a call for a new law to solve the problem. I can’t help myself, so please—make me do the right thing.

Keeping that context in mind will make it easier to understand the setup of Saudi roads. Where it’s essential that you stay someplace, you’ll be kept there. Except within neighborhoods, on tertiary streets that you can’t use as throughways, lanes of opposing traffic are physically separated from each other. A wide median, a wall, a barricade—something will be in place to make it impossible for drivers to cross into oncoming traffic. (And anywhere without a barricade has speed bumps to keep you from reaching fatal speeds.)

The call of the open road

Okay, good idea, I guess, except for one thing: You can’t make left turns.

Well, not where you want, anyway. There are places, but they’re only at intersections between two equally major roads, and traffic is regulated so that only one side, one direction, goes at a time, usually at 25 seconds each. Hit the intersection at the wrong time and you’ll be watching the countdown clock for 120 seconds. That’s if you choose to heed it. Nothing physically restrains anybody at an intersection like that, so…yeah. You see plenty of drivers just squirt through.

No, the far more common setup is the barricaded u-turn. Concrete barricades will force traffic that doesn’t continue straight to make a u-turn, thus:

As for the cross-street (if there is one), well, it doesn’t cross. Drivers on that street have to turn right, travel along the more major street, then make a u-turn some distance ahead to go back to the street they came from and continue traveling. Or, if the driver on the lesser street wants to make a left turn…tough. Make that right, go some distance the wrong way, then make a u-turn and come back to get headed in the direction you wanted to go in the first place.

I was meeting a friend at Le Chateau (marked with the red map pin at the lower center-left), which, naturally, is a Chinese restaurant that looks like a clown disco. It’s easy to spot:

A landmark, to say the least. It was my first time, and I was being driven by someone who didn’t know where it was either (and speaks iffy English), so I was glad it was…recognizable. This is what it took to get there:

We were traveling southwest along King Abdullah Road. Le Chateau, a short way up the street on the west side of Takhasussi, faced us in all its garish glory as we came to the intersection. Eureka! The only access to the driveway is on Takhasussi, so we made a right turn…and then kept going. According to my thumb-guide, it was not quite 2km to Al Imam Saud ibn Abdul Aziz Rd, where we made another right, drove another 1km to King Fahd, made a u-turn, drove back that same 1km, then another 1km to the place where the road fades out shy of Prince Turki, made another u-turn, another 1km back to Takhasussi, then another right and 2km south to…the restaurant we had been across the street from when we first spotted it. Your T-shaped detour grand total: 8km. That’s 5 miles, Americki. A little less than ten minutes, including the two 120-second signal cycles we had to wait through at the King Fahd intersection.

I could draw maps like that all over the city. The way to a friend’s apartment. The route between the gas station and the McDonald’s you can see across the street. The fix for getting to the shwarma place if you miss the exit onto the frontage road that you needed to know about well before you could see the restaurant.

But for all those barricades, you still can’t save these drivers from themselves. You know–the same ones who say someone else needs to stop them from molesting women. Wrong-way driving is common. So is backing up against the flow of traffic. Left turns from two or three lanes to the right. Left turns onto a roundabout to avoid having to go 3/4 of the way around. Drifting across highway lanes with no discernible objective. (Of course, I place some blame for Saudi drivers not taking lane markings too seriously on lane markings that may or may not lead straight into a construction barricade.) And parking? Please. Street-fronted business don’t have designated parking, so folks just pull up and stop anywhere, facing any direction. Then double or triple park on top of that, blocking lanes of traffic. Women on the shopping bus once saw a man leave his car at a red light in an intersection to go into a shop. I’m only sorry I missed it.

Here’s a clip of a typical intersection on a typical afternoon. At the beginning, note the cars to the right that have pulled out into the intersection, against the red light, to be ready to hit the gas at the first opportunity. As the shot pans to the left, note the SUV pulled out to work his way through oncoming traffic to make a left turn. (The opportunity doesn’t come, and he ends up going with the green light.) When we start moving forward, that’s because the light has changed, but left-turners in front of us are still going and will until they’re physically blocked. As we cross the intersection, you can see parked cars at the right have encroached onto the roadway, so cars just move to the left into other lanes without regard for whether there’s anybody already there. Keeping an eye to the right gives you an idea for the parking chaos (including the police car, letting it all go by).

There’s nothing unusual going on in that shot. Drivers will behave the same way every time you go through. Doubt me? Check a snapshot at night: 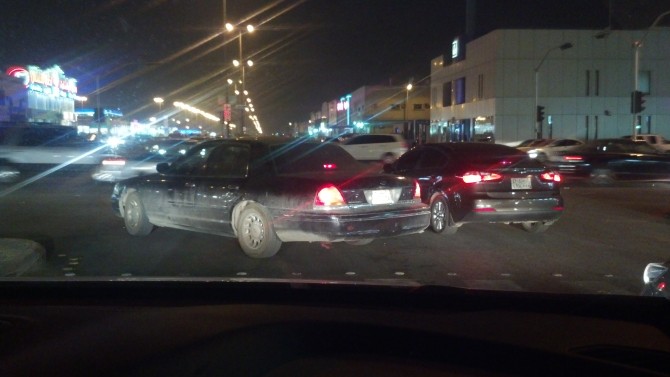 Yup, the blurry objects are cars moving (with the green light) from left to right across the picture. The white minivan at the far side of the intersection, facing into oncoming traffic, is just doing his own thing against a red light. The black cars in front of us, pointed to the left, are cars that came from lanes to our right, pushing ahead of us into the intersection against the red light, and getting ready to turn left at the first opportunity, signal or no.

So yeah, wear your seat belt. And this is where it gets really ugly: Most Saudis don’t. Sure, there are seat belt laws, but they were much resisted by religious clerics who said that the…shape…of a buckled-in woman was too visible. (Better she should die than be noticed?) Now that the laws are there, they apply only to those in the front seat and are universally ignored. Children ride on their fathers’ laps as they drive. You can see four-year-olds leaning out of car windows. Children pile by the half-dozen into the back seats and clamber freely as the car weaves down the road. These roads.

To add to the danger, bored young men drag race and “drift,” which is high-speed fishtailing down a city street. Other favorite pastimes include “Saudi Surfing,” which is holding onto a car door or tailgate and getting towed down the road on your smooth-bottom sandals, or 2-wheeling, which involves getting the car tilted over onto two wheels while speeding along the highway. (Search YouTube for “crazy Saudi driving” if you want to kill some more time.) Outside the city, driving at highway speeds, it’s common to be passed by someone going over 100mph on the left shoulder. Current estimates are that traffic accidents happen at about the rate of one per minute in the Kingdom, with 17 fatalities a day.

The laws are there. But nobody made the religious police officer whose family of 11 was killed in an accident obey them, and he didn’t. (The picture I first saw with the story is no longer there, but it was of a sedan that had 11 people in it, going fast enough to get flipped over.) As I watch speeders with electrical tape over their license plates pull over a hundred meters shy of a highway check point, pull off the tape, drive through the check point, then pull over and put it on again, I think we’ve hit the limit of what anybody can do by enacting more laws. Time to grow up, Saudi Arabia. Time for some self-discipline. Time for buckling your own almighty seat belt without needing your dad to make you do it.

Update: A couple of weeks after I posted this, a delightful photo appeared in the Saudi Gazette of a police officer’s car stuck on the median in Jeddah. As the story goes, he was trying to cut over it to avoid the traffic jam. Kind of neatly sums up the state of traffic affairs in Saudi Arabia. And law enforcement: 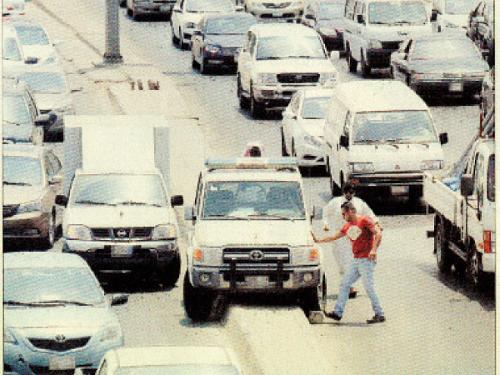 25 thoughts on “Buckle Up, Kids: Driving in Saudi Arabia”