I have heard the word “sarcastic” used to describe my sense of humor. Au contraire, I say. Sarcastic is saying the opposite of what you mean, as in “Now that was smart,” meaning, “That was so stupid that saying it was stupid is stupid itself.” I, on the other hand, am irreverent. Irreverent is thinking things that aren’t supposed to be funny are, in fact, funny. And the more important it is to somebody to be taken seriously while doing something ridiculous, the funnier I’m sure to find it.

This is not the first time I’ve said those words. I lifted that paragraph from a blog I used to keep to snark with my friends about an American reality TV show, The Bachelor. For those not familiar, in each season a houseful of beautiful, eligible women who for a variety of reasons have not “found love” compete with each other for the attention of a single, attractive, equally eligible and lovelorn man. Over the succeeding weeks, through various group and one-on-one “dates” (as well as lots of narcissism, crying, and interpersonal manipulation), he whittles down the crowd to a single, final, purportedly lucky girl to whom he (usually) proposes. They usually break up within a few months. The people on the show are ridiculous, but they take the whole thing completely seriously. For me, the irreverent one, unintended comedy is the best kind, which puts The Bachelor close to the summit.

And I have no problem laughing. Yes, I was well brought up and taught not to laugh at people or talk about them. But I contend that when you put yourself on TV, for the purpose of being seen, you just made yourself available to be watched, talked about, and laughed at. If you don’t like it, stay home, and I will respect your privacy absolutely. But I so rarely have to! Just this past week there was a delicious event in the U.S., as a community paper mentioned a local official by the name of Kirby Delauter in an article about parking issues. He made an angry Facebook post about a “hit piece” and the writer’s “liberal agenda,” and said that the newspaper had no right to use his name without his permission. He even threatened to sue. The writer corrected him, pointing out that she had, in fact, EVERY right to use the name of an elected official functioning in his elected capacity, and the next day the paper ran an editorial titled “Kirby Delauter, Kirby Delauter, Kirby Delauter,” filled with—you guessed it—as many mentions of his name as they could possibly squeeze in. I was utterly delighted. To his credit, Kirby Delauter didn’t take up arms against the newspaper. Instead, a day later, he came to his senses (and/or spoke with an attorney) and apologized.

See, here’s the deal: If you’re out in public, the public is going to talk about you. And “in public” can mean anything up from “walking down the street in a funny way” or “being large and visible.” Yes, people can say awful things, but being offended by it always, always, always, and ONLY reveals an underlying insecurity. Because here’s the deal: The giggling idiots who nudged each other and pointed did NOTHING to you. If you’re confident in yourself, they can’t hurt you. They only lowered themselves. Keep on walkin’, people.

Check it: Let’s use, say, an of-the-moment name in U.S. media, Gronkowski. 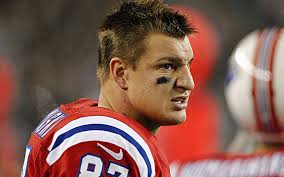 Gronk, as he’s also known. An American football player. (If you start typing his name in Google, “Gronkowski Fantasy” comes up toward the top of the search list. I’m afraid to let my arrow go over it.) Anyway, he’s very good at what he does. And he’s a big dude. 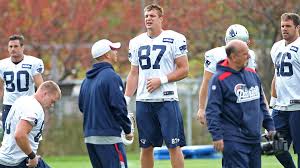 Yup, that big. Among big guys, he’s big. People talk about him a lot. But I don’t think Rob Gronkowski really cares if a couple of jealous high-schoolers inflating their own importance think he’s overrated. Because, you see, they’re insignificant to him. He’s too big to care.

And he’s not alone. A series of conservation ads has been on TV here lately, with the tagline “Nature doesn’t need people. People need nature.” The ads show glaciers and the sea and mountains–you know, Earth being all majestic, with a voice (Julia Roberts, thank you very much) identifying itself as Nature and saying that she’s been here long before us and will be here long after. Our actions from day to day will determine our fate, not hers. She’ll go on no matter what. She is—you guessed it—too big for us to hurt.

As I saw the ad again yesterday, between reports about the shootings at Charlie Hebdo magazine and the follow-on events in Paris, with men claiming to be “defenders of Mohammed” and shouting “Mohammed is avenged!” I thought, there it is again. Us, only hurting each other.

So in the wake of events that can be traced to people being really offended at awful things other people said about their religious figures, I’d like to suggest something else. God is too big to be offended. We’re sure thinking quite a lot of ourselves if we imagine anything else. No, our words and actions are capable of hurting only ourselves. We’re like four-year-olds in the sandbox—a little girl who says, “Your dad’s hair is funny” to a kid who gets furious, hits her, kicks sand, and runs away crying. Dad didn’t need the kid to defend him. Dad really didn’t care what the little girl thought of him. She’s too little, and knows too little, and nothing she can say or do will ever seriously hurt him. There was no need for someone equally small and ignorant to defend him, to avenge his honor. His honor was always—and only—in his own hands.

Being offended on God’s behalf reveals only how small you are. Oh—wait. It also reveals how small you think God is. Both bad. No, your tantrum in the sandbox is frightening other children, and hurting them in the cause of defending a God that doesn’t need to be defended is DEFINITELY on God’s naughty list.

(And by the way, if you can’t help yourself from reacting in the sandbox, try to keep it in proportion. Insult for insult, at the most, even if you’re too dull to come up with a good comeback. Because you are going to be in super-big trouble with Dad if you break a bar off the jungle gym and club to death a kid who drew a funny picture of Dad in the sand, along with a bunch of other kids who saw it and laughed. Especially to defend the honor of a Dad who didn’t need you defending him to other four-year-olds. Felt as if I needed to clarify.)

John F. Kennedy once said “Terror is not a new weapon. Throughout history it has been used by those who cannot prevail, either by persuasion or example.” Prevail? Of course they can’t! Those ideas are TERRIBLE, and benefit only a few, so of course they have to impose their will by threat of terror. And the greatest enemy of terror is ridicule. Remember the boggart, the creature from Harry Potter that takes on the shape of whatever you fear most? And do you remember what disabled it? The “riddikulus” spell, in which you turn the thing you fear most into something funny. Irreverence works. The devil with his pants off has way less power to bend you to his will.

We must defend relentlessly, and without exception, the freedom of people to argue whatever they wish. To ridicule whatever they wish. And however they wish. I’ve seen the cartoons, and some are truly terrible. Uselessly mean. If they were directed at my people (and similar ones have been), I’d be sad. I’d be hurt. And I’d stay away from them and never buy the magazine. But no one has a “right” to not be mocked, so I wouldn’t imagine myself to be in a position to say what the magazine can and can’t publish. I’m irreverent, too, and just because the subject of my irreverence is different (“Hah! Look at the beautiful ridiculous woman crying!”) doesn’t put me in a position to say where you should mark the boundary of yours. And irreverence is essential. Those who should be made small (the Kirby Delauters of the world) are brought to size. Those who can’t be made small (God, Mohammed, Jesus, Moses, Abraham, Buddha, Confucius…) aren’t harmed in the slightest.

Were you hurt or upset that somebody made fun of your dad? I’m sorry. The person who did it isn’t your little friend. Find somebody else to play with. And then go talk to Dad. Tell him about it. Cry to him about it. He’ll take you in his arms and comfort you, but don’t you worry about Dad one little bit. He’s fine.

P.S. And it’s not just me who says it. From the Quran:

11 thoughts on “Too Big to Hurt: The Case for Letting Religious Insults Go”