Here’s how this week’s adventure was pitched to me:

Who could pass that up? So with a crowd of adventurous souls, I piled on the bus to the second-hand souk.

Souks are great. Take the roof off the mall, open up the store fronts, and you’ve got a souk. Of course, you also have to take away the landscaping, the bathrooms, the strategically placed benches and fountains and fireplaces. Pft–details. Here are a few shots from my first souk experience, at the Old Souk in Doha, Qatar: 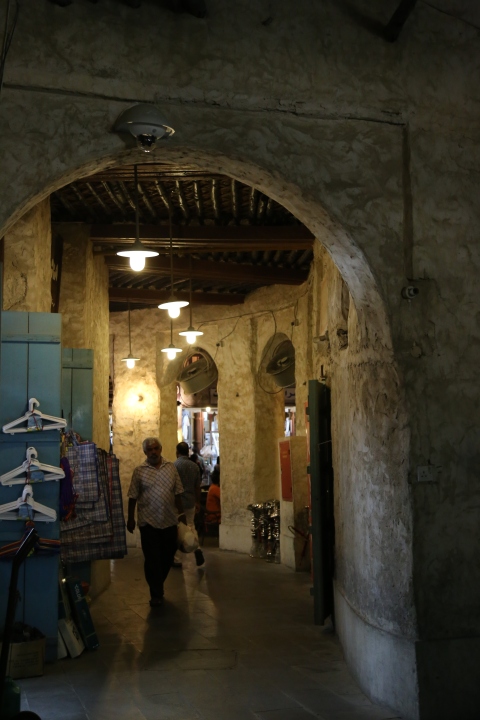 Lovely, eh? Of course, that’s the dressed-up, picturesque, tourist-destination souk. Here’s one shop at the souk near our home where we bought rugs last week:

A little less lovely. Mundane. Scruffy, even. (Though check the array of rug colors inside and consider these in your home. Blog on Saudi decorating is upcoming.) The men selling carpet were wonderful, the prices were fair, and they finished extra pieces for us for free and threw in a couple of bathroom rugs. I left feeling way less skeezed-upon than I ever have coming out of a carpet store in the U.S.

And then here’s the second-hand souk:

You could say we left mundane and scruffy behind a good while ago. It’s 500 little Salvation Army stores, outside, with gritty carpets on the ground and lots of staring and calls of “Sister! Sister! Check! Check!”

It can be kind of hard to know where to look.

But narrowing your focus helps. The bus from our compound goes every month, and there’s a cadre of women who never miss. Yes, these women have all their teeth. They don’t grub in each others’ trash. They bathe regularly, know how to behave in restaurants, and speak in complete sentences, many in multiple languages. And at the souk, they know where to look, which is not at the chaos of shirts and pants and children’s clothes at waist level, nor at whatever funk might be underfoot, but all the way up at the rafters.

The bus schedule says the destination is the “second-hand souk.” But that’s not the name it goes by among the compound women, who call it the “princess souk.” The shopping objective is dress gowns available for a few dollars. “A few” equals five. For a really, really great one in new condition you might have to go to ten. And there are hundreds upon hundreds upon hundreds.

All the abayas and headscarves walking around the city can be misleading. Arab women dress up, a lot. There can be some very well manicured nails peeping out at the end of a sleeve and some killer shoes below the hem. Steve was surprised when he first got here to see expensive, elaborate, and overtly sexy special occasion gowns in store windows throughout the malls. Men and women don’t mix outside the immediate family. Weddings events for men and women are completely separate, usually at separate venues. Even if a man and wife attend an event where they’re expected to arrive together (she in her black abaya), they will separate for the women to gather in one room while the men gather in another. Only then do the abayas come off to reveal the clothes underneath. “Why wear a gown like that when no one is going to see it?” he said. Oh, honey. That room full of other women is a long way from no one.

And dress they do. The city seems to be awash in gowns. Mounds of white donation bags are pushed against the back walls and in the corners of the second-hand shops, full of new inventory that shopkeepers (or their children) are busy unloading and sorting all the time. Our best guess is that the second-hand souk is the marketplace for self-starters who pick up the mystery bags of donated goods at mosques and are welcome to get whatever they can for them.

Taste, however, is an individual thing. And a cultural thing. And Saudi women have a distinct sense of style:

I’m curious about the Carmen Miranda number tucked into the middle of this set:

And its companion piece, which may have been my favorite. Look closely: Rainbow bodice, multi-poinsettia flower at the waist, lining ending at the bottom of the hip. Below that, scrunchy leggings inside the sheer tulle skirt:

I was also intrigued by this tartan-patch number. Appalachian prom?

And every once in a while we spotted some things that weren’t gowns:

Perhaps it would’ve looked better without the big turquoise purse throwing off the effect. Sorry. This next one, however, was a puzzle. It was far too long to just be a big sweater. I think we’re looking at a sweater dress with a r-e-a-l-l-y stretchy short, tight skirt. Covered in buttons because, well, uh–oh, I don’t know:

But I digress. Anyway, despite all the dire warnings about how creepy the men were and how alert you needed to stay, I didn’t have any problem. My most threatening interaction was with the lone woman shopkeeper we saw. I and another women were lining up our shots of the Fantasy in Pink Trio at the top of this set of pictures when she came charging out of her shop, waving the pole used to unhook dresses from the rafters. She banged the pole against the metal railing and yelled at us, then continued yelling down the alley and arguing with the male shopkeepers around her as we strolled away. I wonder whether they were trying to tell her to settle down and she was telling them to mind their own damn business, that she’d yell if she wanted to yell. I’m not sure what she objected to. Was she afraid we’d take the pictures home, copy the designs, and get rich without buying anything from her? None of the men seemed to care about pictures in the slightest, so do your own speculation about whether her reaction says more about cultural imperatives for women to be invisible than it does about merchandise ownership.

By the end of the outing, we were all equipped for next week’s Princess Dinner at the compound, where we’ll bedeck ourselves in our most over-the-top finery. I wound up with this elegant number for $6:

Turquoise is my color, and it came with a headband, so…

I’m hooked. Yes, I’ll be back next month. I am now accepting orders for your daughters’ prom dresses. You’ll have to do your own triple-washing and sequin replacement (I’m finding them everywhere right now), and fit is your own gamble. But the price is right. And despite what I’ve chosen to show here, a lot of women came away with genuinely beautiful (and tasteful) gowns. So next time I’ll put the camera away and get serious about finding something. Love it or hate it? Well, let’s just say I’m starting to plan New Year’s Eve already.

15 October 2015: Since I published this post the Second-Hand Souk has MOVED. I plan to publish a new post soon (with pictures! You might also like my other posts here and here) but until then the new directions that were given to me are as follows: Take the Eastern Ring Road toward IKEA. At Exit 18 stay to the right as the highway splits. Turn off at Exit 21. You will turn left under the overpass. After about 4 km you will see TAJ Coffee Keyask. Turn right. It’s about 1 to 1.5km and you will see the big white spire on the left side of the road. The spire looks like a corkscrew. (It’s quite close to the old location.)

5 thoughts on “I Feel Pretty”